The Los Angeles Dodgers are very hot right now. They are coming off a weekend where they swept the 1st place Philadelphia Phillies, they have won nine of their last ten games, and they hold the best record in the national league at 41-19. One of the biggest reasons I believe the Dodgers are playing so well is that the current players are getting to play more often than they have in the past. Players like Alex Verdugo, Joc Pederson, and Max Muncy are all thriving in their current roles while playing every day.

However with AJ Pollock getting ready to come off the injured list, this creates an issue that every team wants to have, how will the team juggle getting all these players into games and playing as much as they can while also making sure that the team continues to play at a high level? I see really only two options here.

Option 1: Play with a 4-man outfield

This seems like the most obvious choice for the team, and considering how much money they are paying AJ Pollock, the Dodgers do not want him to just sit on the bench when he returns. Cody Bellinger and Alex Verdugo are two players that I believe need to be in the line up every day. Verdugo has played better than expected hitting .310 with 4 home runs and 28 RBI’s, and has played very good defense in center field. Cody is still being Cody as he continues to be tops in the National League in batting average, hits, slugging percentage, OPS, and RBI’s. This will leave three players to essentially fight for one position, Joc Pederson, AJ Pollock, and Chris Taylor. Taylor is the third option in the outfield because he can also play 2nd base and shortstop when needed, but Joc and AJ both will have to fight for playing time in the outfield. 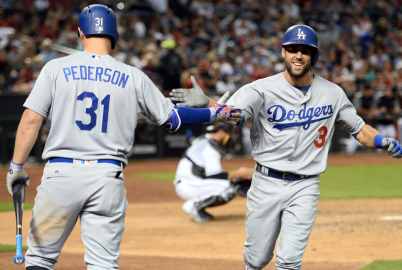 Since Pollock was injured on May 3rd, Joc has been on a tear and is now 2nd on the team in home runs with 18, and has a hard hit rate of over 60% over the past few weeks. It would be really hard to bench someone who is putting up those kind of numbers, yet there is still a way the Dodgers manager Dave Roberts could make it work. Joc Pederson has struggled mightily against left handed pitching, hitting just .190 with 0 home runs and 1 RBI against lefties this year, while hitting .284 with 18 home runs and 32 RBI’s vs righties. Joc could start vs righties and Pollock could start vs lefties going forward and that would allow both players to get enough playing time for them to contribute. 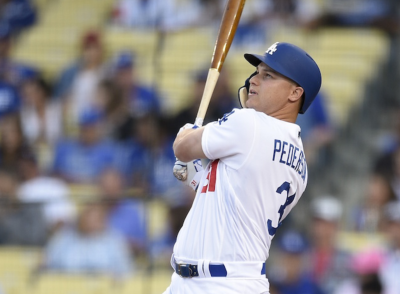 This seems like a little more of a long shot but just hear me out on it. Over the past two seasons, the Dodgers have tried to make it work with getting as many players as they can chances to play. While it has gotten them deep into the postseason, it has ultimately affected their chances at winning the World Series in both 2017 and 2018. This is the first time in the past three seasons where all of the young core players are getting a chance to play every single day and so far, it seems to be really working out for both the players and the team. So who would the Dodgers trade and what would they need to get?

Image: The 2018 Dodgers team watching as they loose the 2018 World Series

Personally I would try to package Pollock in a trade to try and get more bullpen help. The one area the Dodgers have not been great in is bullpen pitching and even then they are still not bad. Closer to the trade deadline, injuries could play a factor in what the team needs, but for now I would say its bullpen pitching. The reason for wanting to trade Pollock is his history. In each of the past 4 years, Pollock has spent at least 1 month on the injured list. When healthy he is an above average hitter and defender with plus speed on the base paths, but he is just too inconsistent. Joc, Alex, and Cody have all played their way into a starting role for this team, and taking them out of that role could only hurt there play going forward.

What should the Dodgers do with AJ Pollock? Do you think they can make it work? Leave a comment below and let me know, and as always, Thanks for reading!