Dodgers 1st baseman/outfielder Cody Bellinger was named the National League player of the week for the week of March 31st through April 7th. Bellinger was on fire, going 13 for 29 (.448 avg) with 13 runs scored, two doubles, one triple, four home runs, and 11 RBI’s in seven games. Bellinger currently leads the major leagues in hits, home runs, RBI’s, and slugging percentage and has helped his team get off to an 8-3 start on the year. This is Bellinger’s third time winning the award, with the first two times coming during his rookie year in 2017 when he was named unanimous rookie of the year.

Bellingers start has been historically good. He is just the 3rd player in MLB history, (Eddie Mathews 1952 and Alex Rodriguez 2007), to start the year with six home runs and 16 RBI’s in their teams first eight games. He also became just the second player in MLB history, (Willie Mays 1964), to have seven home runs and 18 RBI’s in their teams first ten games. Bellinger also broke the Dodgers record for most career home runs through a players first 300 games after he blasted a grand slam off of Madison Bumgarner giving him 69 career home runs.

Bellinger is coming off a 2018 season that saw him regress from his outstanding play from 2017. Bellinger watched all of his offensive stats take a dive from where they were in the previous year. He hit 14 fewer home runs, had 21 fewer RBI’s, 17 fewer total bases, and dropped 111 points on his slugging percentage while playing 30 more games than he did in 2017. Bellinger also went cold when it mattered most in the World Series. He went just 1 for 16 (.063) with just one single, one run scored, and six strikeouts in the five games vs the Boston Red Sox.

Image: Cody Bellinger reacts to striking out in game 3 of the World Series / photo credit: Pinterest

So what’s changed from 2018 to 2019? For starters, the Dodgers brought in a new hitting coach Robert Van Scoyoc. The 32 year old is known around baseball as “the man who turned JD Martinez into a superstar” and was also instrumental in helping make Chris Taylor into the player he is today. Bellinger has said he and coach Van Scoyoc have been watching a lot of film from both 2017 and 2018, trying to break down what things worked and what did not in those two seasons. The two are trying to get Bellinger back to his 2017 form, and through the first ten games of the year, they certainly have Bellinger on the right track. 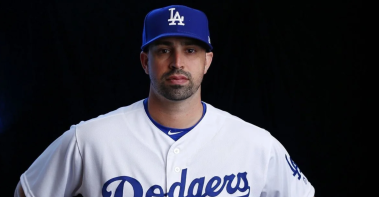 Another one of the key changes was the way Bellinger holds his bat. In 2017 Bellingers bat was flat prior to the pitch. However in 2018 his bat was pointed more towards the ground and made it so Bellinger had to apply more force to getting the bat through the strike zone and didn’t have the same timing to catch up to certain pitches. At times, it looked like he was confused and stuck at the plate, and I believe it contributed to his poor hitting against left handed pitching, (Bellinger hit .226 with 5 home runs and 25 RBI’s in 2018). 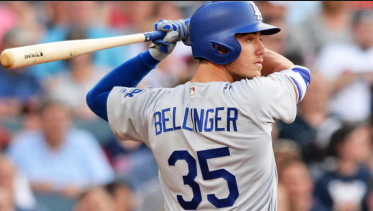 Image: Cody Bellinger at bat with bat pointed up in 2018 / photo credit sportingnews.com

With Bellinger swinging the bat the way he is and the rest of the offense contributing at high levels, the Dodgers seem to be playing at a different level than they were in 2018. This is a team that looks like it can compete with anyone in baseball and Bellinger is going to need to keep playing well in order to help lead the Dodgers back to the World Series for the 3rd year in a row.

Do you think Cody Bellinger should have been player of the week? What are your expectations for Bellinger in 2019? Leave a comment below and as always, thanks for reading!