The Dodgers have started the season 4-2, winning three of their first four games vs the Arizona Diamondbacks, and splitting the first two games of a  three game series with the San Francisco Giants. With the first week of play in the book for the Dodgers I wanted to look at the 3 biggest takeaways I saw that could impact the Dodgers going forward in the season.

The Dodgers started the 2019 season with a bang, literally. The team crushed an opening day record eight home runs, including four off former Dodger Zack Greinke. It was a historically hot start to the season for the Dodgers who put up 42 runs and 50 hits over the four game series with their division rivals. The Dodgers also set a franchise record hitting a homerun in six consecutive games, breaking the streak set by the 1954 Brooklyn Dodgers.

Cody Bellinger has been leading the charge for the team through the first week. In his first six games, Bellinger is hitting .429 (12/28) with five home runs and twelve RBI’s and is looking more like the player that won the unanimous rookie of the year award back in 2017. In 2018 however, Bellinger regressed especially vs left handed pitching, and was even benched at the end of the year for his poor play.  Bellinger says he has been watching good and bad film from the past two seasons with new Dodger hitting coaches Robert Van Scoyoc and Brant Brown. 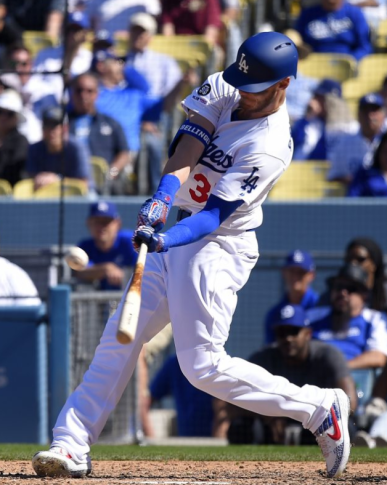 Make no mistake, the Dodgers are still the deepest team in the National League when it comes to having players for any pitcher. With Corey Seager back looking like the 2016 rookie of the year, AJ Pollock and Joc Pederson hitting the ball hard like they are, and getting key contributions from every player in the line up, the offense has really impressed me this first week of the season.

The teams only two losses this year are because of reliever Joe Kelly. In game two of the series vs the Diamondbacks, Kelly gave up a 3-run homerun to Diamondbacks first baseman Christian Walker that tied the game at 3, then the next inning allowed another run that would send the game into extra innings. The Dodgers went on to lose that game 5-4 in thirteen innings. More recently, Kelly gave up three runs in the seventh innings after the Dodgers were up 2-1. The team would go on to lose that game 4-2. 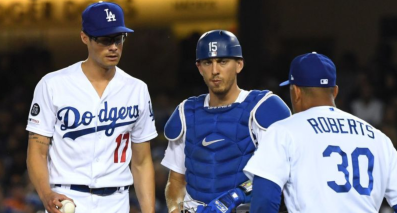 While you could argue that in both cases the Dodgers could have come back to win, it does not take away from the fact that Kelly has blown two separate leads late in the game. The Dodgers signed Joe Kelly to a 3-year 25 million dollar contract this offseason. While Kelly was average at best during the 2018 season, (4-2 with a 4.39 ERA and 68 strikeouts in 65.2 innings pitched), it was his postseason play (11.1 innings pitched, 13 strikeouts, 0 walks, and 1 earned run allowed), that made the Dodgers wanna pull the trigger on signing the 30-year old reliever away from the World Champion Red Sox. Hopefully it’s just early jitters and Kelly can get back on track soon. I am willing to give him the benefit of the doubt since it’s still early, but if he keeps playing like this, management may have to think about using someone else late in games.

Overall, I thought the Dodgers pitching was good. Starters Hyun Jin-Ryu, Kenta Maeda, Ross Stripling and Julio Urias all had strong outings to start their seasons. The four starters have made five combined starts this year going 30 innings allowing just six runs across the five games, (Stripling and Urias have yet to allow a run). The only pitch Walker Buehler struggled during his first start (3 Innings, 5 hits, 5 earned runs, and 0 strikeouts. While the young righty is coming off a season that saw him finish 3rd in the rookie of the year voting, and saw him throw the most innings of his career, he is just two years removed from Tommy John surgery, so the teams is being cautious with him.

The bigger issue for the team has been the bullpen. In the first six games, Dodger relievers have given up 20 runs over 25 innings pitched, and while the team was able to come away with wins in some of the games, it’s a sign of a bigger problem going forward. If the team can close games out, they will have to rely more on their starters to go deeper into games and if starters go deeper into games earlier in the year, they become less effective at the end of their season when they are needed most. 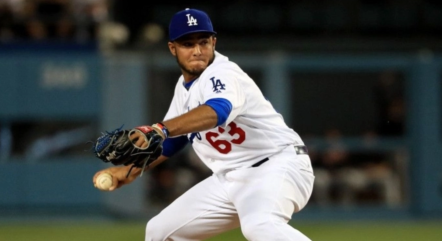 Luckily the Dodgers got some encouraging news this week. Three-time Cy Young winner Clayton Kershaw is expected to make a minor league rehab start tomorrow, his first start of the year at any level. If all goes well, he could look to rejoin the team as early as next week. Kershaw has been struggling  with a left shoulder injury, and missed his first opening day since 2010. I understand Kershaw may not be the pitcher he was from 2011-2014, but I think at age 30 he still has a lot left to give this team.

He is still the leader of the pitching staff, and with him back in the rotation, the Dodgers will be able to move lefty Julio Urias to the bullpen, which would allow the team to have a reliable arm coming out of the bullpen other that closer Kenley Jansen. Jansen, who had heart surgery this past off-season looks good so far, but wants to bounce back after a sub-par 2018 where he had the worst ERA of his career, and the fewest strikeouts he has had since 2015. 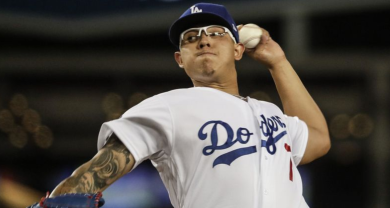 The Dodgers have a lot to be happy about after six games. However it’s a long season and there are still 156 games to go. While the team has lost the past two World Series, I am hoping they can finally make the right moves to capture a title that has evaded the Dodgers for the past two seasons.

Do you think the Dodgers are the team to beat in the National League? Do you think they can win it all this year? Leave a comment and let me know, and as always thanks for reading!