Today, the Los Angeles Angels of Anaheim and Mike Trout agreed to a 12-year 430 million dollar deal to keep Trout in Anaheim for the rest of his professional career. Trout will make $33.25 million for the next two seasons, then make $36 million a year until the 2030 season.

Image: Mike Trout before an At Bat / PC NBC News

The deal includes a full no trade clause, meaning if the Angels wanted to trade Trout they can only trade him to a team that he approves. It also includes a full no opt out clause, meaning that Trout cannot opt out of the deal to test the free agent market until 2031, which would be his age 39 season. Yes the deal is fully guaranteed, and yes it is a lot of money to pay a player that many casual sports fans outside of Los Angeles have probably not heard of, however when you look at the impact that Trout has had on the Angels and on baseball, the deal almost seems like a steal for what the Angels are getting 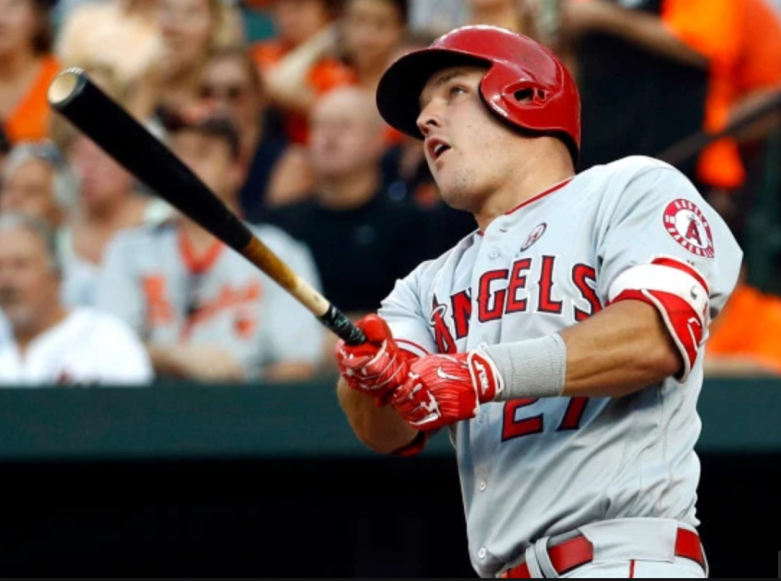 His 64.3 WAR might be the most impressive stat of them all in terms of how we compare players from different ERA’s. As of this year, Trout is 99th on the All-Time career WAR list and Trout currently sits in 4th place on the active leaderboard for career WAR. The only players ahead of him are Robinson Cano 69.2 (14 years in MLB, 35), Miguel Cabrera 69.4 (16 years in MLB, 35), and Albert Pujols 100 (18 years in MLB, 38). Trout is only 26 years old an has played for 8 years, and has almost caught up to 2 of the greatest players of the 2000’s. Not to mention when you compare Trout’s WAR to other Hall of Famers through their age 26 season, Trout has a better career WAR than Ty Cobb (63.4) and Mickey Mantle (61.4).

In terms of what he has done for the team, Trout has been the main reason that the Angels have become of the the most valuable teams in all of baseball. When owner Artie Moreno bought the team in 2003, he paid $183.5 million for the franchise. Today the franchise is worth $1.8 billion, and a lot of that has been in thanks to Trout. Since 2012, the Angels have been top 7 in attendance for the season and per game attendance. Not to mention that Trout has never had an off the field problem, has never caused a great deal of stress to his organization, and has been a pillar in the Orange County community since his debut.

The only knock on Trout right now is that, as great as he is, the Angels have only made the playoffs once since 2012. They played in one series in 2014 vs the Royals in which they were swept 3-0, and Trout went 1-12 in the series with a homerun and three walks. It’s hard to imagine that the best player in the game has only seen the playoffs once in his 8 year career, but unlike other sports, one player can not make a team playoff worthy. Baseball is the ultimate team sport,and without a complete and well rounded team in all aspects one player isn’t enough to make a difference, even a player of Trout’s caliber. Image: Mike Trout after an at bat during playoffs / PC Bleacher Report

If none of that can convince you, then maybe this will. Trout is and has been the best player in baseball, plain and simple. He is the Michael Jordan, the Serena Williams, the Tiger Woods, the Tom Brady, the Wayne Gretzky of baseball. He is the face of this game and somebody that every little kid who dreams of playing the sport should aspire to be. While he may not promote himself the same as other stars do, make no mistake, Trout is an incredible baseball player. Trout will now likely finish his career with one team just like his idol Derek Jeter. Now it’s up to the Angels to give Trout the pieces he needs to take himself to the next level by getting into the playoffs and eventually winning a championship trophy. Do you think Trout was worth the money? Will Trout ever win a title with the Angels? Leave a comment below, and as always, thanks for reading!