After losing the final member of “Lob City” this offseason, many NBA experts had picked the Clippers to regress from their great regular seasons they had in the past 5 seasons. However this years Clippers team is proving that they don’t need a “Big 3” to win games and contend in the stacked western conference. The Clippers currently sit at 13-6, good for the 1st in the West, through the first 1/4th of the year. The Clippers also own wins over 4 of the 5 next top teams in the West already this year, (Warriors, Grizzlies, Thunder, and Trailblazers), and are on pace to make the playoffs this year. So what’s different for the Clips, and can they keep up the solid level of play?

To make things even more interesting, the Clippers also have one of the 3 most efficient players in basketball, and its not who you’d expect it to be. The 7 foot 3 inch Serbian beast, Boban Marjanovic has preformed at an extremely high level, and when he is on the floor, he currently holds the 3rd highest Player Efficiency Rating (PER) in the entire league behind only Giannis Antetokounmpo and Steph Curry.

Defensively they have been very solid. They currently rank 1st in the NBA in opponent field goal percentage, (43.5%) and 5th in opponent 3 point percentage, (33.3%). This means they are effective in stopping other teams from shooting well from inside and outside the arch. Their 107.6 defensive rating is good for 11th in the league, and they have done enough on the defensive side to allow the offense to operate at an extremely high level. Montrezl Harrell has lead the way defensively for the Clippers, averaging 1.1 steals per game and 1.8 blocks per game, but if you have watched any of the Clippers game this year, you know Harrell does a lot for the team that does not show up in the box score. 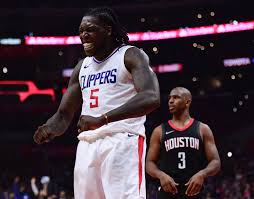 Put all this together, and you have the making of a team that could really turn some heads come April. So what can the Clippers do to keep up this style of play? Two words, “Stay Healthy”. Over the years, the Clippers have been hurt by the injury bug many times. Last year they lost Patrick Beverley early in the year to a knee injury while Danilo Gallinari missed most of the year with leg issues. If the Clippers have any chance at making a run, they will need to be at full strength come playoff time. The Clippers have already proven this year they can hang with the best the league has had to offer so far this season, and with other prominent western conference teams not performing at their expected levels, the Clippers could have a real opportunity to sneak through the playoffs and make a serious run at Golden State.

I know a lot of Clippers fans, including myself, were sad to see “Lob City” get torn down, but this new Clippers team should have fans very excited. They may not have the star power of other teams, but this team has a lot of talent, and Doc Rivers has them all on the same page, they will be at the top of the Western Conference at the end of the year.