The 2003 World Series was a true David vs Goliath story. The New York Yankees came into the series having been in the World Series 4 of the last 5 years and had 3 World Series titles (1998-2000) under their belt in that span. The Marlins were a fairly new team having only been around for 10 seasons, but they did have World Series experience winning in 1997 in a thrilling 7 game series vs the Cleveland Indians. The Yankees had 101 wins and had superstars Derek Jeter, Mariano Rivera, and Roger Clemens leading the way, while the Marlins had a group of young talented players such as a rookie Miguel Cabrera, Dontrelle Willis, and Josh Beckett to pair with their established stars Ivan Rodriguez, Luis Castillo, and Brad Penny. After being down 2-1 in the series, the turning point came in game 4 when Alex Gonzalez hit a walk off homerun in the 12th inning to tie the series 2-2, and the Marlins would go on to win the series in 6 games behind World Series MVP Josh Beckett who pitched a shutout in game 6 at Yankee Stadium to secure the championship for the Marlins. 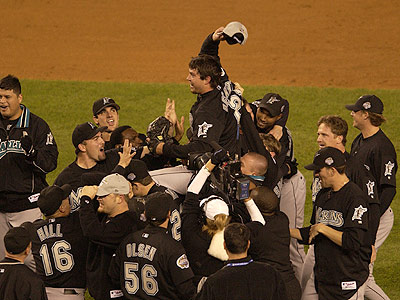 This was the World Series when David Freese became a household name for many. Going into the series, the St. Louis Cardinals lead by Albert Pujols and Tony LaRussa came into the series as the underdogs. They had only won 90 games in the regular season and were able to sneak into the playoffs by winning the wild card on the last day of the 2011 season. The Rangers on the other had cruised into the playoffs behind a franchise record 96 wins lead by stellar pitching staff. The Rangers were 1 strike away from winning the series until David Freese hit a ball just off the glove of Nelson Cruz to bring home the game tying run in the bottom of the 9th inning. 2 innings later, Freese would hit a walk off homerun to send the series to a game 7 where the Cardinals would go on to win their National League best 11th World Series championship 6-2. Freese was of course named World Series MVP for his heroics, and is still known to this day as one of the most clutch postseason hitters of all time.

It was their year that Cubs fans had waited over a century for. Not having won a title since 1908, the Cubs reached the World Series for just the 1st time since 1945. While the Cubs had won a league best 103 games throughout the regular season, and were the heavy favorites going into the series, they found themselves down 3-1 in the series with 2 of the next 3 games in Cleveland. The Indians were trying to make history of their own as they had never won a World Series title and had the 2nd longest active streak for years without a title. Either way, someone was going to break a long dry spell in this series. The Cubs were able to force a game 7 in Cleveland where the series would go to extra innings for the 1st time ever, and the Cubs were able to hold on in the bottom of the 10th to secure the teams 3rd World Series title ever and officially break the curse of the billy goat once and for all. Ben Zobrist was named MVP of the series, and many of the Cubs young players like Kris Bryant, Anthony Rizzo, and Javier Baez secured themselves as Cubs hero’s forever. 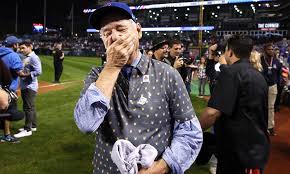 This is probably the most dramatic World Series on this list, and would most likely be the top World Series of the 2000’s on many other lists. Coming off 3 straight World Series wins, the Yankees were looking to become just the 3rd team in MLB history to win 4 straight World Championships, (the other 2 being the 1936-1939 Yankees and 1949-1953 Yankees), while the Diamondbacks were in the franchises 1st World Series in their 3rd year as an MLB team. The Diamondbacks were a team lead by pitching in the form of Randy Johnson and Curt Schilling, and had home field had advantage, while the Yankees were trying to win a title on the heels of 9-11, and were lead by Derek Jeter, Mariano Rivera, and multiple other Hall of Fame players.

During game 3, President Bush was there to throw out the 1st pitch of the game, in what is now described as the most important and significant 1st pitch in MLB history. The series would be a back and forth shootout with teams trading wins at home and on the road. The series came down to a game 7 where Luis Gonzalez hit a walk-off single off Mariano Rivera to win the game and the series. While Luis Gonzalez was the hero of the night, Schilling and Johnson were named Co-MVP’s of the series and the Yankees would be the 1st team in MLB history to lose a World Series to an expansion team.

This is easily my favorite World Series to date. Now as a Dodger fan I would have loved to have seen my Dodgers bring home the 1st title of my lifetime, but still as a fan of baseball, this series had pretty much everything you would want as a fan. The Dodgers came into the World Series off a franchise record 104 wins and had knocked off the defending champion Chicago Cubs in the previous round 4-2. Meanwhile, the Astros were the surprise of the year coming off a then franchise record 101 wins and narrowly beating the Yankees in a fantastic ALCS 4-3.

The two teams were pretty even and split the 1st 4 games 2-2. Then came game 5 which many fans consider to be one of the greatest World Series games ever. A game that featured Clayton Kershaw blowing 2 three run leads, the Dodgers tying the game in the 9th to send the game to extra innings, followed by Alex Bregman walking it off in the 10th inning to give the Astros a 3-2 lead in the series. After tying the series 3-3 in game 6, the series went to a 7th game where the Astros jumped out to and early lead and never looked back.. Lead by World Series MVP George Springer, who had 5 HR’s in 7 games, the Astros won their 1st championship in franchise history.

Hopefully this year the Dodgers will finish the job and I’ll have to make a new list to add a Dodgers win to this list.

Do you agree with my list? If not, what’s your favorite World Series of the 2000’s? Comment and let me know!