Sunday night, during the Patriots vs the Chiefs Sunday Night Football game, Tyreek Hill caught a 75-yard touchdown pass to tie the game at 40-40 with just 3 minutes to go in the 4th quarter. After he scored the touchdown, a fan flipped him off and poured his beer onto Hill. While the fan has since been banned from all events at Gillette Stadium in Foxborough, Massachusetts, it made me think about how absolutely ridiculous it is that someone would do that to another person who is just doing their job. 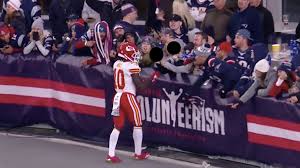 Think about how anyone would feel when hearing this, especially someone who can not do anything do defend himself when it happens.Players can’t  react to fans, in fact, they cant lay a finger on a fan, the league will fine the player, usually for a large sum of their paycheck. Fans always get a lesser punishment for their crimes than the athlete does for protecting himself/herself. Plus, you on average spend $10+ dollars for 1 drink at most games, why would you want to waste it by throwing it at someone? It’s like taking a $10 bill, getting 10 $1 bills, then throwing $6 of them away for no reason, it’s just a waste. Plus, in today’s day in age, there are always cameras watching everyone’s every movement, do you really think there won’t be a camera to capture your crime?

The most famous incident of a fan/player altercation came in November of 2004, when a fight broke out between the Indiana Pacers and the Detroit Pistons at the Palace of Auburn Hills in Detroit, Michigan that resulted in $10 million dollars in forfeited game checks, and 146 days worth of suspensions for the players involved. While the fight broke out on the floor between just the two teams, things went from ugly to scary after a fan poured his beer on to Indiana shooting guard Ron Artest’s face, (now known as Meta World-Peace). Artest became irate and attacked the fan in the stands, prompting other fans to join in the fight. 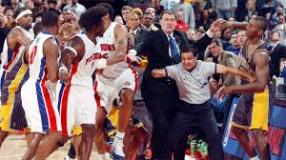 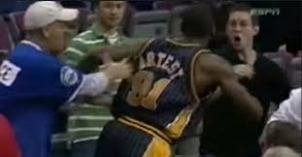 While I do not agree with Artest’s actions that night, some blame needs to be put on the fan. If the fan didn’t pour the beer on him, Artest would have never laid his hand on the fan. Just because you are at a sporting event, doesn’t mean that athletes wouldn’t react to being assaulted like anyone else. 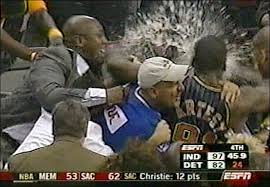 We hold athletes to a higher standard because they make more money and have a greater influence on people than many of us do, but sometimes you just need to take a step back and look at it from the athletes perspective. Imagine going out and doing your job, and while you do it, you have thousands of people who can say anything they want to you at anytime, and you just have to sit there and take it. They will talk about your parents, your kids, your wives, and say anything they feel like, and they can throw things at you and put your well being in danger. 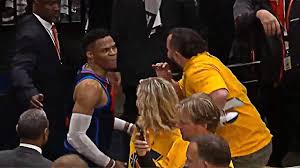 I’m not saying we should stop heckling, that’s half the fun of going to games. What I am saying is that as fans we have a responsibility to keep ourselves under control at games, and to not provoke players. Players can handle being told they suck, players can handle being told they are looser and that they are hated. Player cannot however, stand when fans threaten them, or their families well beings, player cannot stand having objects thrown at them, and players cannot stand having to fear retaliation when someone attacks them. 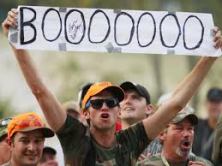 It’s our job as fans to create an exciting and energetic environment to help their team. There is a reason it’s called having a home field advantage, but that advantage shouldn’t come because a fan decides he wants to take matters into their own hands. Cheer for your team and let the game be played the way it’s supposed to be. At the end of the day, we as fans cannot keep attacking athletes the way we do. Athletes are human beings just like you and I, and every human being has their breaking point. Keep that in-mind next time you go to a game. 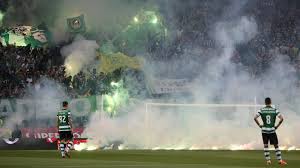 How do you feel about Athletes and fans? Leave a comment on the article and we can talk about our different or similar perspectives on it. Thanks for reading!